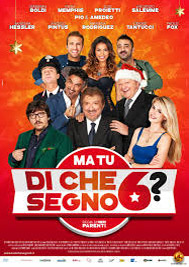 Five interwoven stories comically investigate the effects of astral prophecies. The main characters are: the greater the Carabinieri Augusto Fioretti too protective of her daughter Ilaria, Cavalier Carlo Rabagliati who ends up in jail after beating up the Pope’s secretary at the news of no longer being the provider of the Vatican, the clerk dell’Euronics Saturn bubble wasting his opportunity to be able to make love with the beautiful Nina Rocchi and impregnates the ugly colleague Wanda, the lawyer Giuliano De Marchis who loses his memory after a fall and does condemn all its customers and ultimately Piero Lomuscio who as Orion, editor of an astrological magazine, tries to help his friend Andrea Tricarico to woo her new neighbor, Monica, but various attempts will prove ineffective.