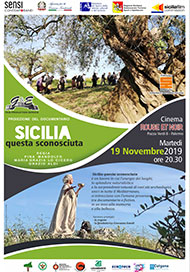 The project:
The documentary, this unknown Sicily, is part of the guidelines of the Sicilian Film Commission’s call for bids which considers cinema and audiovisual media “a fundamental means of artistic expression, cultural formation and an instrument of social and economic growth”. The project of the documentary, Sicily this unknown, is also inserted in the directives of the announcement that requests as the objective of the works to be co-financed: “the enhancement of the cultural, artistic and environmental heritage in order to enhance the territory”. In particular, the documentary aims to bring to the attention of the Sicilian institutions and of the operators of the tourist and educational sector an unexplored naturalistic and archaeological treasure that has not yet been exploited and to offer Italian and foreign spectators and spectators, who will see the film, images and sounds of rare beauty still unknown and unexplored.

Reasons:
This project stems from the awareness of the immense archaeological and naturalistic heritage that is still unknown or of little value in our land of Sicily and of the regret for the state of degradation and neglect in which the natural areas are located. Its purpose is to increase tourism and cultural growth and enhance the area by using images. In addition, the documentary will aim to raise awareness of the serious environmental problem of the industrial area Priolo-Augusta-Melilli which dominates and invades, with landfills and smelly fumes, the very site that will be the subject of our documentary. An area that from there to Syracuse, Megara Iblea and Pantalica, represents one of the most famous and precious naturalistic and archaeological areas of the entire Mediterranean.