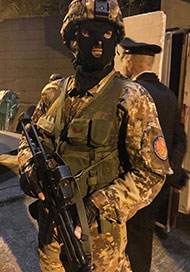 The relentless detective chief superintendent INGO THIEL (50) and his commission must solve a cold-blooded multiple murder in Mönchengladbach, a big city in the west of Germany. This brutal crime gives him insights of the hidden mafia activities in Germany and leads him as well to the roots of this kind of organized crime in Calabria, Italy.

Mönchengladbach, a big city in the west of Germany, in the middle of an autumn night in 2012: Five Italian people get shot in front of their restaurant, right before leaving. A few hours later, the relentless detective chief superintendent INGO THIEL (50) has to form a commission of forensic, profiling, manhunt and IT-experts to solve this cold-blooded multiple murder. Especially, he has to rely on the support of Interpol-Detective CARLA ORLANDO (36), who joins his team for the investigation from Italy.

Two witnesses help the investigation team to create a first photofit of one of the – likely two – killers. Also, forensic results give further clues. Through the information about the Italian mafia and its structure given by Carla they get further insights of the hidden mafia activities in Germany. Shortly after, they find out with the aid of DNA-traces that the two killers are cousins and that probably killers and victims were part of a feud between two Calabrian mafia-clans, which already lead to over 140 fatal victims.

To trace the killers responsible for this massacre Ingo needs the assistance for gathering more evidence from Italian prosecutor SILVIO BERTONE (50), who is distrustful to everybody because of the everyday threat against mafia-hunters like him. Eventually, Bertone and Ingo meet in person in Calabria, where they arrange an exchange of evidence, which enables both Ingo and Bertone to convict clan-members in Germany and Italy of multiple crimes. As a result, Ingo, his team, Carla as well as Bertone can celebrate the arrest of the two killers – whereas they cannot capture any of the clan chiefs behind those crime-organizations.